move to... Back to gallery Stuff

Jump to... My Tips / Tutorials

Remember these are my opinions and what I like to share with others. Not everything I say or think is the only way to do it. (my art is used here for any demonstration). Also maybe worth mentioning that my art is by no means perfect. It even sucks very often. I also note these things down to remind myself of some techniques and tips which I.... like to forget. ehem..

Variety in art is something I never really thought about in the past, I just drew what was in my comfort zone and never really looked at it from different angles.. And now variety is so important to me. It would even be important to me if I wouldn't share my work online. It's just important to me, as an artist. But wait what do I mean with "Variety"?

Alright to give an example, I want you to look at two different collages I did.

Who I drew there is unimportant. What I want you to look at is what the character's on each image are doing. Which collage do you personally think has more variety, the first, or the second one?

The first one only features portraits. The second one however features different poses and different level details. Fullbodies, poses, even story telling. Well, not everyone likes to draw the same stuff obviously. Someone might love portraits the most and another person likes drawing stick figures. But either way I definetely see lag of variety A LOT. I seem to notice a pattern of people being too repetitive, and people who ask for advise on their work often get this tip from me as well. Because trying different things and building a more interesting portfolio is just so much more fun than constantly drawing the character's head facing left or right. Especially headshots seem to be what a lot of people do and love. (which is fine) but after some time it comes quite boring in my opinion. You can make a character so much more interesting with more variety as well. Even if you are bad at poses. It doesn't have to be perfect, just try it!

If I start a new piece, my first thought is: "I want it to be interesting". And when I do that, I don't pressure myself at all with it. It´s more fun than anything else. With something challenging and creative, I know I will like the result and the background behind the artwork A LOT more after, rather than drawing the same face again for the 394759393th time because I don't step out of my comfort zone. If you haven't considered this before, try it out. Perhaps you will be way happier with your work and gallery.

Shading can be a tricky thing. And often, it can even ruin the piece instead of improving it. What you use and how you use specific techniques is what makes bad and good shading. I often see hate on airbrush shading. But in almost all my work is airbrush shading. Did you know that? Airbrush shading can be used wrong, I have seen in thousands of times. Practice makes perfect. The most important thing is knowing how to place it. The most common issue I see when airbrush shading was used is placing the shading too intense and along the outlines of the whole character figure instead of paying attention to the light source. This often gives a dark,dirty look rather than nicely done shadows. The same goes for not making it smooth enough / being too messy with it. Celshading on the other hand is often the more simple, less bad solution for many. I myself use it, but never without the mix of airbrush. Mixed shading techniques is something that really makes my art look good. If I wouldn't do it the way I do it or leave out a few steps, I can say for sure it would look terrible, haha. If you are currious how I go about my work > flat color > airbrush shading > celshading/often more painterly > lighting > highlights/detail > coloring outlines(if any) > filters such as noise/ very gentle gradient on top for perfect mood > done.

Huh? not caring? Yea! Most small oppsies aren't important. The stuff you only see when you zoom in to max. (Altought I tend to fix even the tiniest unnecessary detail which is such a annoying habit lol). However things like white spots because the bucket tool hasn`t filled everything, are kinda a thorn in my eye. It takes two seconds to fill that 3 white spots in and it would look so much better too.

Not connecting lines (unless it`s nice and loose on purpose), wobbly lines or overlapping lines which should be ereased. No line variation, no smooth ends. Pretty much any app has a few line settings. You can get a much cooler pen for your lines if you mess around a bit.

I wanted to give paintings it`s own section to talk about. Paintings are one of my favorite things to do (for years now) and whenever new peps are trying to paint. I often see the same repeating issues, which I used to do as well.

I´ll use furries here to explain, especially fur is something I see poorly drawn and all over the place very often, humans not so much. (or well, at least lineless furry art seems to be more popular). So, I want you to look at this old icon from 2016, as well as this little umbreon. These were mainly my beginings with making lineness artwork.

It´s save to say, these are ugly, or well, at least pretty flat. At that time, I loved it. Now, I want to scream. The fur just looks wrong and has no detail at all. The eyes have no depth and stare at nothing, the shading isn`t right and close to none existing. The shape of the eyes and tongue are wonky and not smooth.

Now I want you to look at these which are more recent. The texture is there, the shading and depth as well. What I have done different? Well It's just practice really and finding out how paintings and dynamic rendering works. 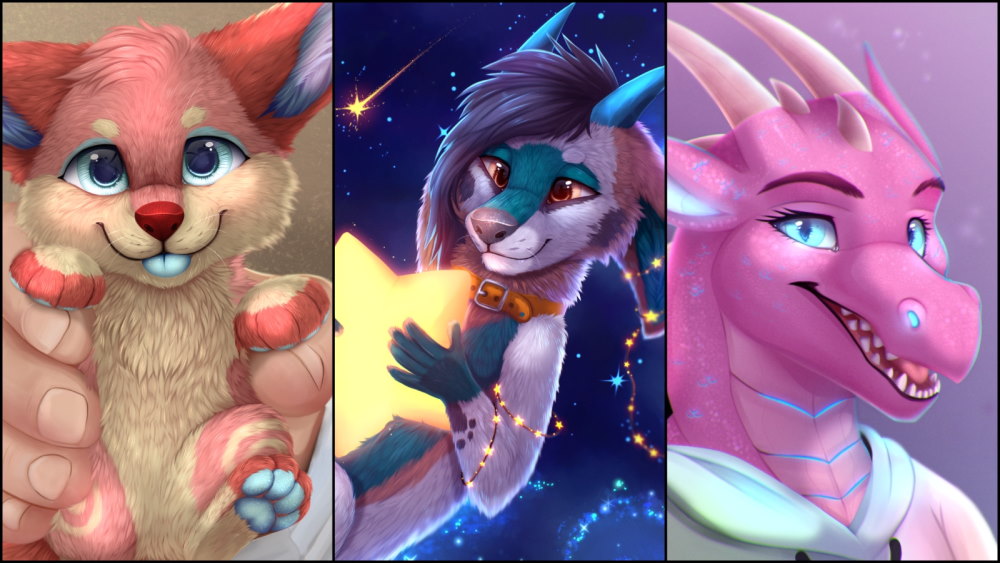 This kind of improvement does not happen overnight. Paintings are a very complicated thing to learn, and especially if done messy can end up pretty uneven or flat. But if you got the hang on it, it`s very fun to do. My number one tip for painting fur ( or painting in general) is finding the right brush(es) for it. I personally don't use custom fur brushes. I paint each individual stroke by hand. I simply like it more and can control the fur and flow a lot more. I love using my hard watercolor brush with fade in-out ends and pressure sensitivity which mixes slighly to paint the fur strokes. NO other brush I messed around with ever gave me a better result.

I use pretty much the same technique in human art, or hair and clothing. Working with watercolors. Putting in some depth, contrast and texture. For things like grass. clouds, leaves, I even use custom brushes sometimes and try to let them fit in with the rest. I tend to not use custom brushes too much tho, because it often gives off a copy paste look, which I personally feel like looks very unbalanced and "unfinished".

Skin on the other hand, is a more tricky thing to paint. It needs to be smooth, while still having some depth and contrast too. I have the most success by simply working with a gentle airbrush brush, watercolor my mix brush as well as plenty of different shading and effect layers. Skin is still a little try and error area for me. But expermenting and messing around, especially with very dramatic shading often does the trick. Look up photos, reference from there, look at the shadows and how much contrast they can have. Often we are too gentle with that and the piece ends up flat.

One thing I see commonly done, and which I love to do as well sometimes, is lining only the character in a scene and the background being lineless. It's a style choice I really like, however I often see it done poorly, which is pretty normal if you aren't strong at lineless rendering. One very specific example: character in a forest. Trees are often flat, have no texture, airbrush shading. It just doesn't look realistic. Here is a tutorial I quite like. It also shows textures really well. But textures can be done in many ways.

Into making money with your art just like me? Then this section might be something for you as well. Now, I am someone who never gets commissioned the regular way. ignored in fact. But there is a reason for that, which I myself am aware of.

So you are probably asking why am I in this sittuation and why I am not changing if I know the issue. Well, it's quite simple. I don't like doing what the audience would prefer.

From my years as an artist, both hobby and job I figured out quite well what people like. What styles, themes people love. (in what I am capable of drawing). What I would love to get commissioned for and the style I love drawing in most, is simply niche. Very niche. Especially my semi realism and none furry art. It's not popular nor is it anything people would usually get. Not because it is bad, but because it does not fit into peoples interests. I can change that however with underpricing massively and drawing in styles people simply love more.

While I am not underpricing, because I very well think my art is worth what its worth (and this is probably the only thing in my life I'm confident about) I often offer work, mainly sketch auctions, in different, more loved styles that are still mine/I used to draw in. But I do so because I need money, not because I enjoy it much. I don't hate it, I wouldn't do anything I truly hate. But it isn't what I would love to draw.

How I would love to draw for orders (left) versus how I often draw to sell (right): Cute, fluffy, loveble. Furries, Furries.. more furries. Furries are cute, no doubt. And they are a massive community. (also the most friendly I ever met). People love chibi, they love huge shiney eyes. Those two style elements along with anime (unless you offer NSFW) are the most popular. People often don't care for anything else. Or at least, rarely. If you offer NSFW, your skill almost does not matter. And yes, thats true, in many cases. But if you are like me and don't offer it as a commission option, getting commissioned when you aren't cheap as fuck nor fit into anything people favor, getting orders it close to impossible.

You also have to remember you aren't the only artist out there. Millions of people want to get money for their work. And if there is a cheaper option with similar quality, people will go to the other person instead. No matter if your art and your service is better. I always see people getting scammed and ghosted by big artists who get commissioned all the time and don't deserve it. No this is not me being jealous, but those people often have poor servie and don't care about thier clients. I rarely hear PSA's about unknown folks. There are people out there, whenever it be me or others, who are trustworthy artists and do art with care but always end up sitting in the corner with no traction. You are probably feeling exactly like this right now too. But not worry, the issues can, but might not be your art.