Added a few questions myself too.

what is your favorite color to work with?

It's aqua and bronze

who is your favorite character to draw?

My own character Lui as well as most of my other ocs ^^ I love drawing interactions between them most.

what song(s) do you listen to when you do art?

None. I don't listen to music while drawing. I watch videos, movies or series. Mostly commentaries on Youtube.

how often do you draw?

At least an hour every single day. I rarely don't draw daily.

A love both and I did both. Today I only draw digital and love doing it.

do you prefer sketching, outlining, or coloring?

I hate sketching, I love lining and hate coloring in. I love rendering (shading and highlights as well as textures)

show us at least 1 drawing you did recently. 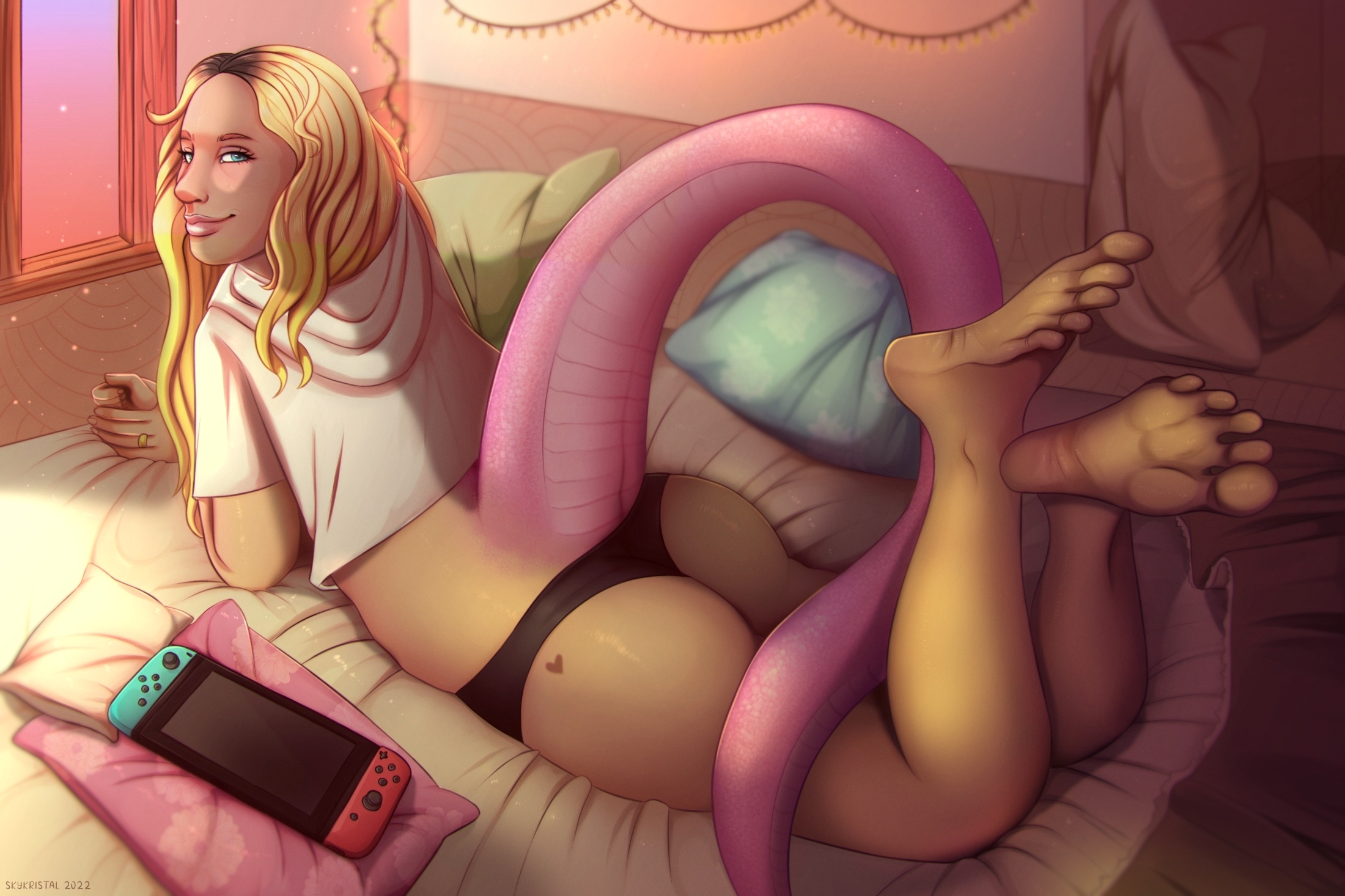 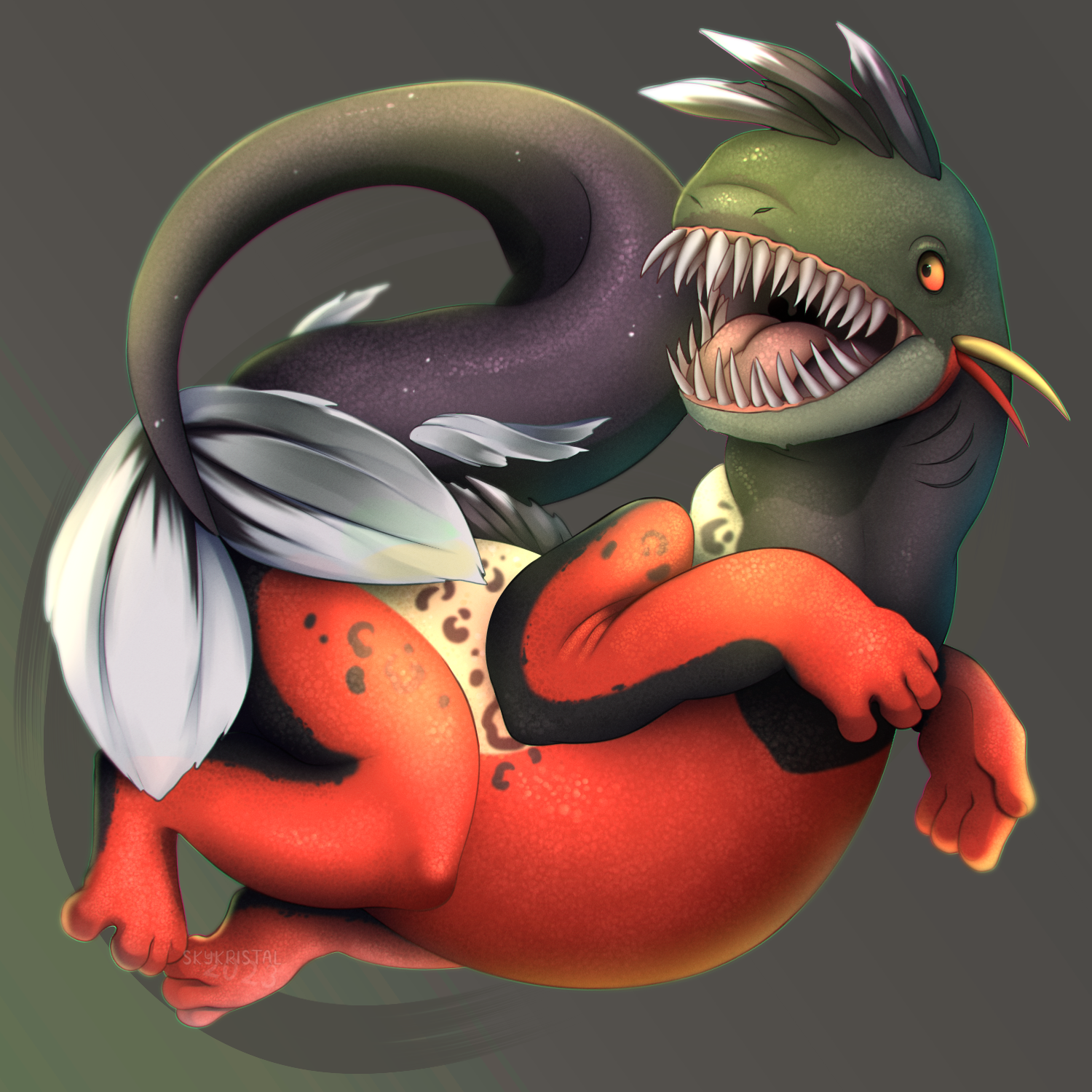 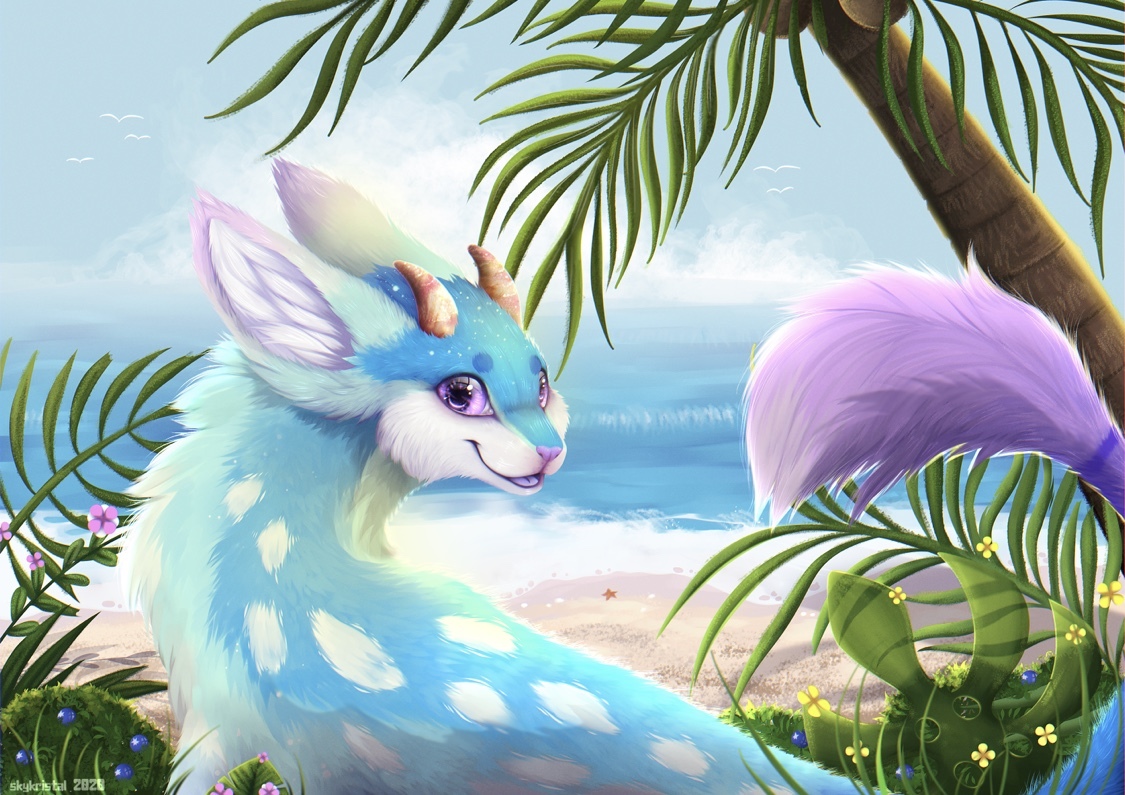 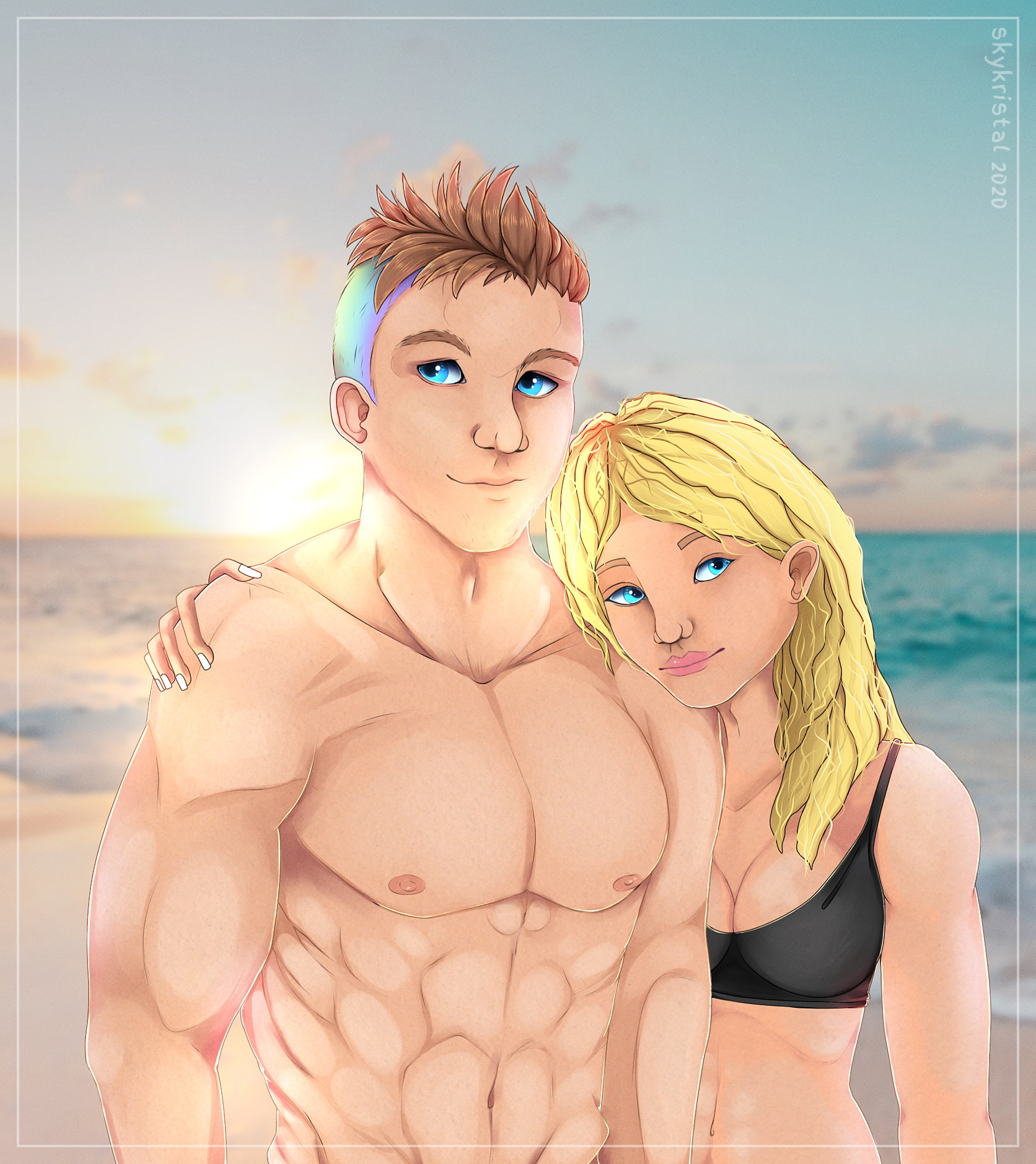 what drawing program do you use?

are you right or left handed?

Often a mix of both. I love working with warm and cool colors together. But if only one, I will go with cool colors.

what was something that you used to draw a lot that you don’t draw as much anymore?

Ferals. Especially feral wolves. This is something I literally moved on from 110%. I also did an "art thoughts" blog entry related to that topic before.

when was the last time you did art?

What is your favorite thing to draw?

My own characters and other peoples characters! As well as other original content. Humans, Dragons and weird creatures. Action, story telling, adult themes and epic shit. I also love to draw nudity and shirtless men. When drawing my favorite ocs I often just want to draw that lmao.

Adorable stuff, under specific circumstances. Sometimes a cute couple pic or a lovely little icon is a nice contrast to my darker, less kid friendly stuff.

Furries and common ferals. By that I mean generic stuff such as furry dogs and cute animals, in combination with chibi or huge baby eye appeal. This type of stuff was my favorite for a few years, actually. But my interest changed fully.. I do always like the result of them when I draw them (e.g. for commissions in auctions I do sometimes.. because it sells very well) but I don't enjoy drawing generic cute stuff with zero depth/or the process of it. I have absolutely nothing against it or if others draw it or show it to me, but its not something I'm into anymore personally. And it's something I almost never draw of my own ocs too, as it is super unfitting and empty.

Show us your oldest piece of art you have on hand.

from 2014, not my oldest artwork ever but the oldest in my current storage. 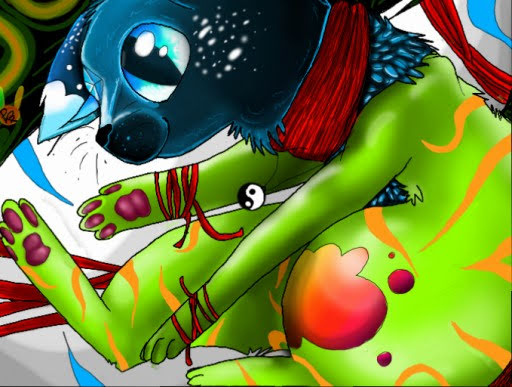 The stuff I'm very proud of, my rendering! Rendering is something I'm very good at. I also like my own style a lot, which wasn't the case a few years back. I was mainly scared to try and learn to get to a style I actually want. Because of fear to fail. Took me about 2 years to get to this point.

Backgrounds. My backgrounds aren't terribly bad, I don't hate them but they are the least favorite thing when I look at the end result. Especially nature and plant heavy backgrounds. They still look pretty wonky and not how I imagine them. But I am proud of myself for doing backgrounds in almost every single piece I do. I also just hate not having one.

Do you draw more fanart or original art? If fanart, what fandom do you draw the most of?

Original art! I however dont hate fanart, but its just not something I'm into much as well as my fixations and interests changing too quickly. I also had a phase a few years back where I was really into HTTYD and Pokemon and drew a ton fo stuff related to it. Now, a fanart happens almost never or maybe once a year If I'm really loving something at one point. Currently I'm not really in any fandom art-wise. I'm generally not much into fandoms honestly. But I do like Animal Crossing and Viva Pinata (I have an obsession with that since I was like 10 and played it on my nintendo), however I dont do art related to it.

What would you absolutely refuse to draw?

nasty fetish stuff... vomit, piss etc. as well as rape, incest and pretty much any other illegal activity. No, not even for a ton of money. It's just gross.

How would you rank your art? (poor, mediocre, good, etc.)

Honestly I'm a bit insecure about that. But I wouldn't rank it very low. I have improved and learned a ton over the years and think I'm able a do no perfect, but pretty decent artwork. I'd rank it good, In a few areas mediocre.

Do you have a shameful art past? (recolour sprite comics, tracing art, etc.)

Yes I actually have. I was tracing artwork and game screenshots back in 2013 when I first got into digital art. I was very poor at english back then and didn't understood much. When people started commenting "traced" at one point I thought those were commpliments. I was known for tracing and people started calling me out. To a point it got pretty bad. They still did even after I moved on from it and analysed every single artwork I uploaded. It got too much for me, damaged my mental health quite a lot and I decided to start over under a new name. The issues stopped after that thankfully but I developed social anxiety for the first time. But that was pretty much the only drama I experienced in the art community. Except for a few overprotective artists/designers accusing me of stealing their ocs because I used the colors blue and yellow and stealing the way someone drew a galaxy lmao. No but seriously that was just ridiculous and nothing I count in.

How often do you use references?

More rarely than I probably should. In my last 4 drawings I used 1. for a rough pose idea. But I like using refs for backgrounds or colors often.

Are you confident about your art?

For the most part, yes!

Do you draw more today than you did in the past, or do you draw less?

I draw more today. I also had less time in the past to do it more.

Do you think you’re justified in giving other people art advice?

Yes, but only in areas I'm very secure in. Such as shading, rendering, colors as well as anatomy. Especially in ferals because its something I was mainly focusing on for many years and understand most. But I wouldn't give someone who draws way better than me advice. Simply because my advise probably wouldn't help much.

YES! I love it. Challenging pieces are also my favorite results most of the time.

Do you feel jealous when you see other people’s art, or inspired? (Be honest!)

Both! But more inspired than jealous. I like to analyse other peopels art and try to copy some techniques I love into my own style.

For digital artists: how many layers does a typical piece require?

This varies from piece to piece. But mostly I have many manyyy layers. Today about 50-80, sometimes 100+ but very rarely less than 20. I also started using layer folders recently. Nerver did before, not sure why. My program got this feature about 2-3 years back and because it didn't had one before I guess I was just used to it. But folders are so nice, if you have them, use them!