Infinity is a shapeshifter from Crypton who is one of the most evil & mean indivituals. She want´s to get rid of Lui & his loved ones at all costs. But there´s a reason for all that..

! This profile may contain disdurbing topics, gore and violence.
Personality

Infinity is very cold and doesn´t show her feeling often or at all. She mainly spends her day figuring out plans on how she can harm or make fun of others who are a rock in her way. She is also able to show positive emotions but hides it in front of others as she doesn´t want to seem hurt or "human". She mainly rips out Lui´s heart (which doesn´t do much beside from knocking him out for a few seconds) or cut off heads just to feel good again.. as she loves to have control over things and life.

Infinity loves building weapons and loves to experiment with all kinds of chemicals. Often, she´s trapped inside her own body, and she tries to escape from it. Her original self, which she has no access to, is everything but dark...

Infinity was "born" on a cold hidden planted, many lightyears away from our galaxy. Crypton! On there, life is close to none existend, only shadowy figures and dragons covering the dark lands.

After Lui and Becky connected, an Imbalance in the universe happened for still - kinda unknown reasons. It´s assumed the existence of the golden dragon god caused a "crack". Crypton, the cold ice and metal planet, a parallel dimension, was affected by this and opened up a portal right to earth. Lucius, Markus and Infinity came in their life that way.

It was a casual night in the city, traffic and people talking in the background. The night seemed peaceful and relatively quiet. Totmansdoll after all is one of the tiniest villages with only a few houses, which are covered the very soft, green grass and flowers.

Rapediatly, a strange sound appeared in the big, dark cornfield, right next to it. A white, shiny and kinda galaxy looking portal opened, waving plants and corn all around....

Unlike Markus and Lucius, Infinity was the one who never turned into someone kind and gentle. The only thing she can feel is anger and frustration.

Lui is the one Infinity want´s gone no matter what. Strangely, Infinity and Lui occationally like each other for a few seconds but it mainly ends up in them both fighting each other again. Infinity is also slighly attached to him due to the fact that her now ex , Lucius, is Lui´s doppelganger.

Infinity used to be Luciu´s wife! But now she pretty much hates him, same for Lucius.. They both meet each other on their home planet & stayed together for many years until the imbalace happended.

Rebecka and Infinity are bound. They are each others doppelganger. They look alike and function like a voodoo doll for each other. Which often makes things like fights pretty difficult. No one want´s to harm Becky but at the same time want´s to harm Infinity. Luckily, Cryptonite is what can kill Infinity but somehow doesn´t affect Becky. So Becky uses this pretty often to get rid of her for a short time, however it is deadly for her if she gets in touch with it herself.

Inf´s dragon form is how she mainly appears. She dislikes to go out in as her "human" self, also because she looks like Becky, who is very popular. Being called her is the most annoying thing to her.

She can shoot electricty, which is comming out of the bands in her face. However, electricity is very harmful for her if it´s not her own which her body produces. 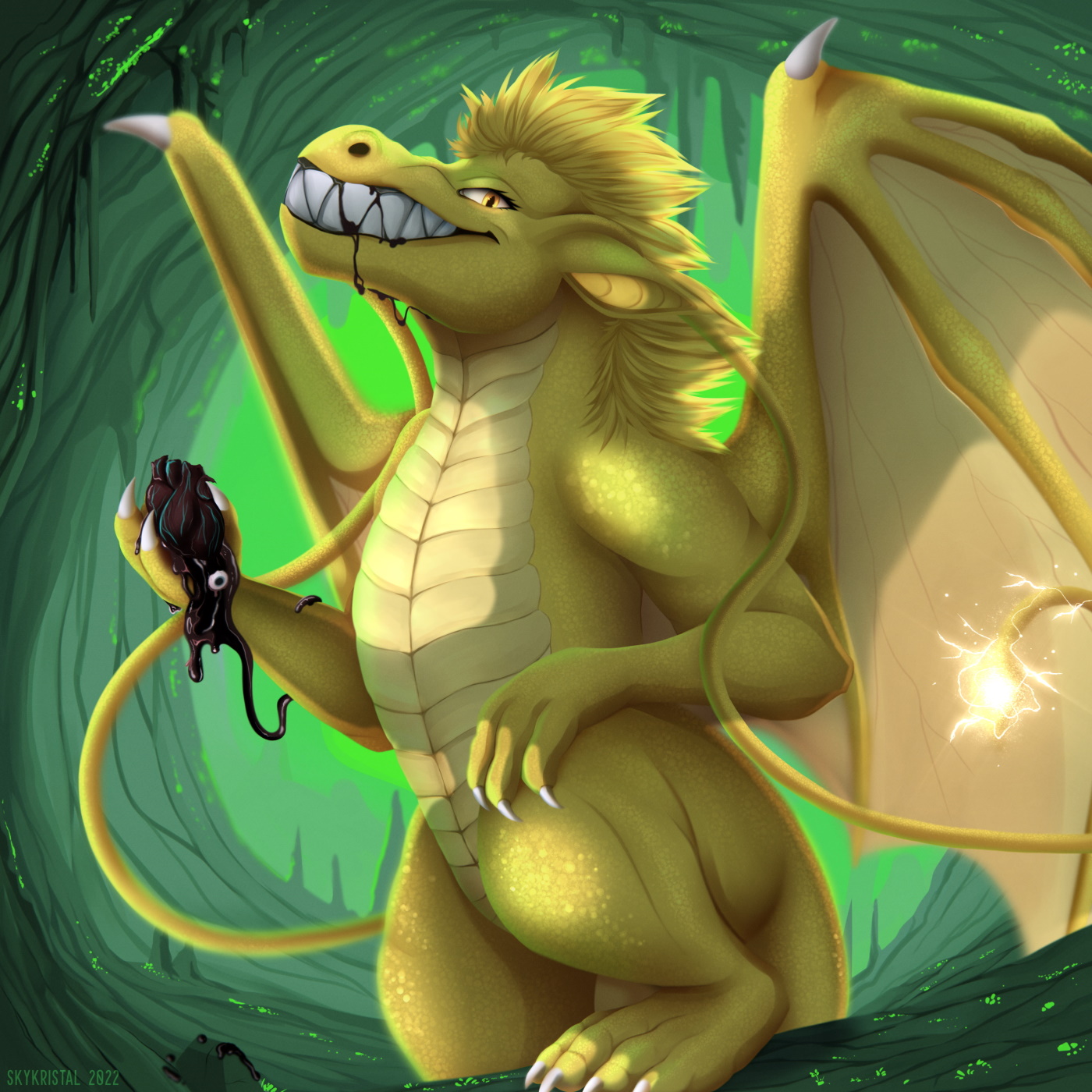