Becky is a creative soul who was born into a popular and rich family. She is part of the castle which is flying high over their village. It´s named after her family´s name.

She has the ability to transform into a dragon. Not since birth, she later in her life obtained dragon chi from finding love. And then envolved into a inferno, which makes her a god! She has a pretty chill life now, together with her partner Lui, lots of friends and her son, Feli!

Since she got into her relationship with Lui, she started working as sort of undercover agent. She flies around , helping people out who need it and saving them from supernatural issues that are going on. And she actually gets paid for that.

Becky is often shy but pretty extrovert, she can talk so much sometimes that you just want to leave. She can relax and open up to friends and family members, tells them about her problems and fears. Outside this bubble however she´s actually pretty introvert for the most part and hides behind a "fake persona" for safety reasons. In the past, when her life situation was still very different, she had to fake it even more. Close to nobody was able to communicate with her in any way simply because on one was allowed to. In that time, she was pretty depressed and frustrated all the time, but the face she always had to put on always seemed arrogant and very slef centered, when in reality she was the complete opposite. Often laying sad and lonely in bed for hours until she finally felt asleep. The only person she could talk to was her little sister Annika.

She´s a big eater and LOVES pancakes. Lui, the sweet guy who changed her life mainly backes them for her for breakfast. Sometimes she even eats close to 30 pieces, since she doesn´t ever feel full . But even if she eats a lot, she´s still not fat at all. She has a relatively skinny body shape but has some cuddly meat on her bones for sure. She´s pretty confident about her body shape, if she´d put on a few more pounds it wouldn´t bother her much. Eating is one of her favorite things to do after all. But cooking not so much, she´s often too lazy and her husband is cooking for her and the whole family almost all the time anyway because it´s such a big hobby for him.

Becky is a lot into watching series and movies, especially doing marathons at night, together with friends and her loved ones. Mainly the romantic, mysterious, and horrifying/creepy stuff interests her, depending on her mood.

Another very big hobby she has in singing and creating music! She once did it to "sing away" the loneliness and it always just made her happier. Now that she has very kind, close friends and family, she can sing with them together. They own a pretty large, fancy party room, sometimes they almost spend an entire day in it.

Becky has a slighly cubby bodyshape in both, her normal human appearance and her dragon forms! Because she just loves to eat all the time. Her clothing taste always changes and she loves to dye her hair in many ways. Her hair is blonde by nature. She rarely wears makeup but if she puts on a few colors, then she mainly chooses blue tones.

Becky has a tattoo on her left shoulder. It´s her family symbol, an underlined crown, but cut in half. Before she got into her relationship and dragon abilities, her tattoo wasn´t cut. It magically changed after that. It represents that part of her now belongs to someone.

Rebecka has a couple of abilities which she explored and developed over time since she became a god.. Some abilities also vary and/or vanish depending on what kind of story I wanna do.

Becky has a little dragon marking on her wrist, which shows the chi she has inside. A little pink, wavey silhouette. She can also let this marking disappear and hides it from people. 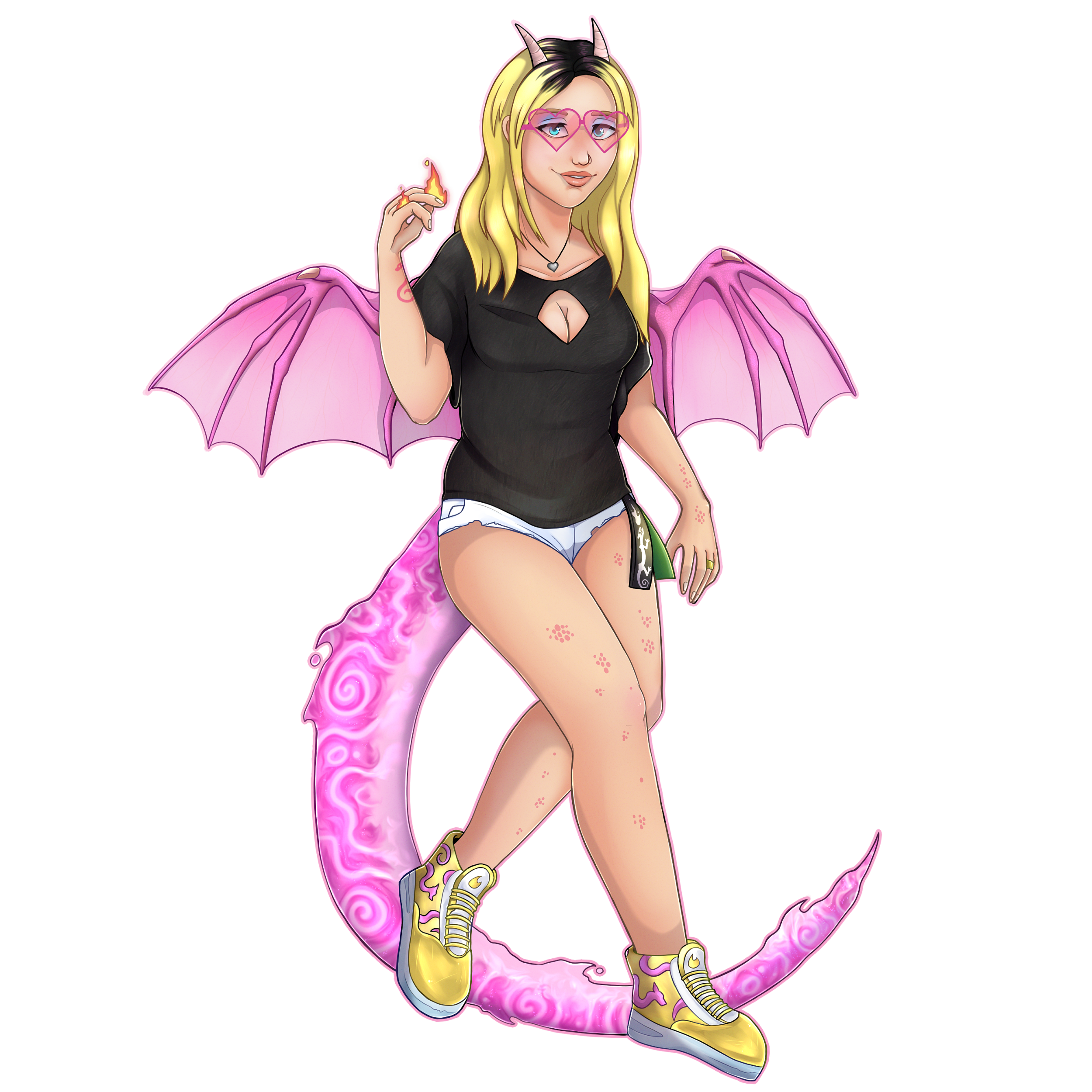 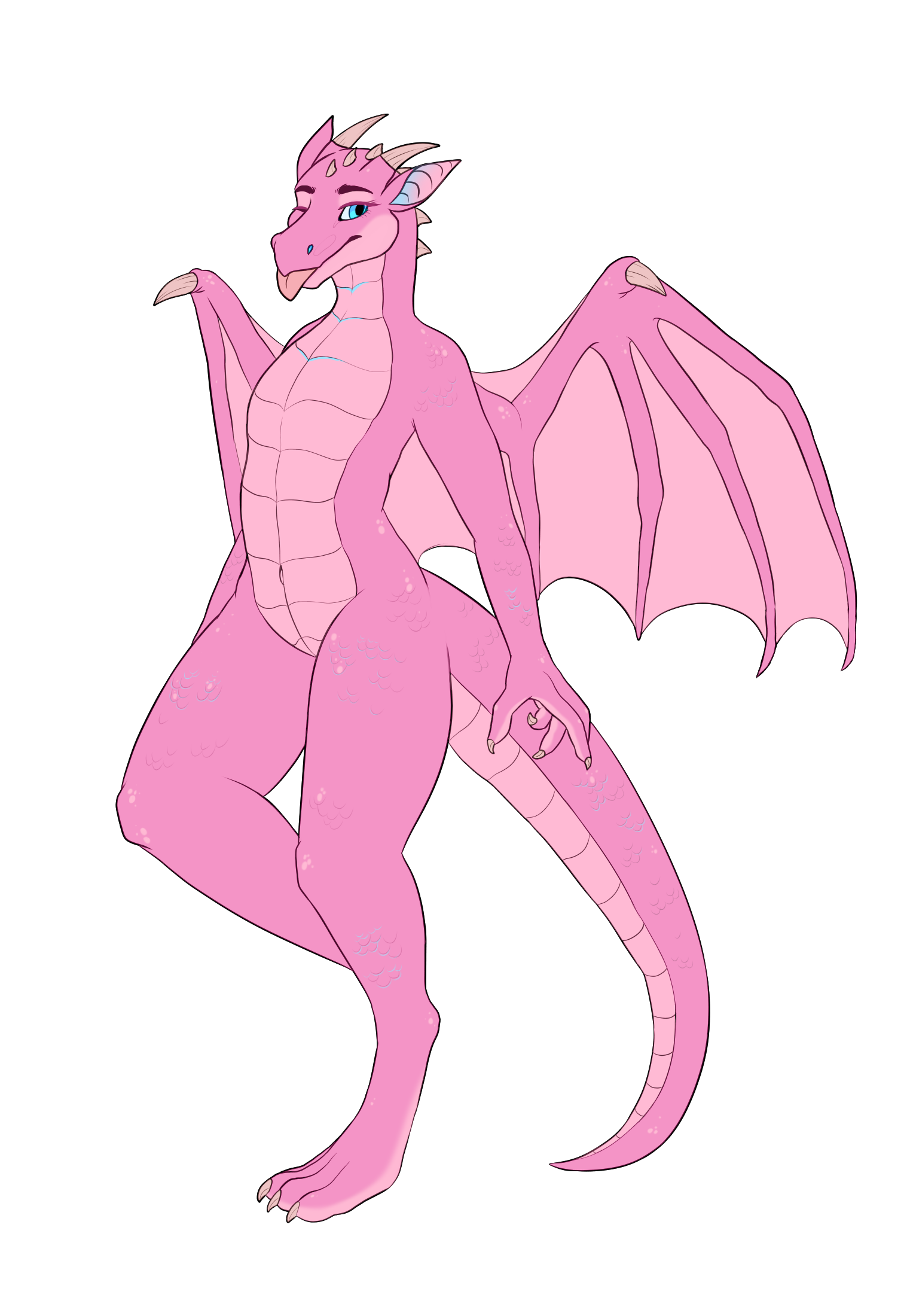 The pink dragon form is the very first chi she obtained because she got into a serious relationship! This is the one and only way for her to become a dragon in their world! These dragon powers, however, arent very special or strong. She´s not considered a god nor has a lot of abilities. But she can fly and jump around and reach areas she couldn´t visit before! The Pink inferno in comparison is a whole lot stronger and once she got her hands on them, everything changed! Especially her status in the magical world. She´s now a God! Her body is completely fire! You can not look through her body but the flames on her back and wings! She has the ability to teleport and merge together with her partner Lui into a green inferno! "Green Inferno" , also known as "green flame" is a combination of the pink and blue inferno. If both merge, they became one and turn into a green firey dragon! One soul has controll over the body. Mainly the stronger one of the two. Stronger mentally, not physical.