Lui is a mysterious guy who is hiding lots of secrets and abilities, loves music, art and fights! He has pretty dark humor and often goes a bit too far. He´s someone who loves to hang out with his friends and also his enemies in a kinda.. sarcastic way. Overall, he can´t really keep things very seriously , not even in life or dead sittuations. Born as a complete normie , later than became a quite powerful and fearless, rich god, with lots of strength and difficulties as well! Living his life is both, luxurious and exhausting.

Lui hides his real self from a big side of his family. Which is why he has two names. Luigi is his original name but not his real identity anymore!

He´s a pretty active guy who loves to make jokes, sarcasm, doing parties and throwing in some dark humor. You can´t hurt his feelings that easy, he has quite a hard shell you need to break first. Lui is also kind, gentle and a very trustful person who protects his loved ones with all his power. Because of all the energy he has, as well as his life sittuation, he became quite fearless too. You better don´t cross his way at night if you´re not cool with him.

Sometimes, Lui seems like a shy and introvert person from the outside and can actually hold this fasade fairy well. In reality he´s very confident and loves to show off what he has to offer. Whenever he can, he wears his funky clothing with lots of neons and colors! Lifeless clothing isn´t really his cup of tea. In fact, he hates it. Lui always loves to dye his hair too and comes up with the most funny looks sometimes. He likes to party and sing quite often so his outsanding styles always fit in.

He often has a pretty chill and kind face expression and because of that he seems friendly and trustful to others. He always had this relaxed look since he was little. But if he wants he can literally be the opposite. If he isn´t happy about someone or something, it shows.

For some reason he loves to lean against walls, makes him feel more comfortable and it sometimes helps to make desicions.

Born in Totmansdoll, Luigi´s home village, he grew up with lots of complications and struggles. Had good grades but that was pretty much it. School was important to him and something he focused on the most, to run away from his other problems mainly. His little Brother Felix was another bright side in his life, he was always taking good care of him and they always went on vacations together.

What he didn´t knew at that time, his life would change forever. He meet Rebecka!

Becky and her whole family are rich, popular worldwide and Becky isn´t allowed to talk to anyone but at the same time must find a partner which she will have lifelong and will have a bound to. This loving bound will cause golden dragon chi. Never did he know that he would be the choosen one for this, which was the start of a huge everyday journey and turned him into the guy he is today. The popular, musically talented guy with many abilities. Thanks to Becky and her community, Lui is part of the big hidden magical world, which he now rules along with Fred, the white dragon. When Fred will pass, he will follow in his footsteps and the huge, shiny castle high over the clouds will be his.

Lui has a couple of abilities which he explored and developed over time since he became a god..
Some abilities also vary and/or vanish depending on what kind of story I wanna do.

transfoming into dragon(s) Flying Control of fire, electricity and water Walking through objects for a very short time Communicating through thoughts Telekinesis Faking other peoples voices Teleportation (fire based) Manipulating night and day time Switching looks in under a second

He has around 385 different dragon forms, but he doesn't use a lot of them. "Chi" is what the dragon abilities are called. They´re glowing light balls that you put on your wrist to obtain their power. The gem which he has on his wrist allows him to obtain and keep many dragon-Chis in his body, or more specifically in his gem. They´re also the reason for his big detailed dragon tattoo! Normally a person can not have more than one chi at a time, it´s not biologically possible and leads to death for none gods. The few listed below are frequently used and are part of important milestones in his life.(might add more from time to time)

The "dragon marking" on this arm, which he sometimes also calls his tattoo is a refection of his chi. The marking moves and chances. It never looks the same.(which makes it very fun to draw hehe). The dragons that are visible on it are mainly his main forms. such as red dragon, hot fire, golden dragon, white inferno and so on which are visible in different shapes too. The shapes and forms also depend on how he wants them to look. No limits. Because of his 300+ dragon chis, his marking can feature all kinds of dragons and colors. The dragon powers most people start with actually, they don´t have any special powers, except for breathing fire and flying of course. Flying with them is pretty slow and hard. When he first got into the magical world, he got this dragon chi and started to explore the world with them.. This form mainly features art of him when he first started being `different`. Still shy personality, affraid of mainy things and having very careful behavior Hot and spicy! This flame is out of controll. The huge fireball on the tail end can be used to attack. He can shoot it and it will explode by collision. It regenereates after a few seconds and he can shoot again. He must be careful tho, everything he touches in this form will catch fire eventually. He goes kinda crazy when he transforms into this form. It changes his personality and behavior a lot due to the energy. Very powerful and rare. Since only one person in the entire world will be chosen to own them. Lui in this case! Flying is very easy and light. He can fly super high and can breathe in space. However, a few in the magical world want them and because of that, his life has become quite dangerous. But a lot of people don't know that, if they get in touch with this dragon chi and try to obtain it, they will die within seconds. The Golden Dragon Chi might not be the most powerful in existence but the most special. Only because of it, he was able to evolve a lot more later in his life. When he came together with Rebecka he became a fearless, shiny, golden scale and at the same time a god! 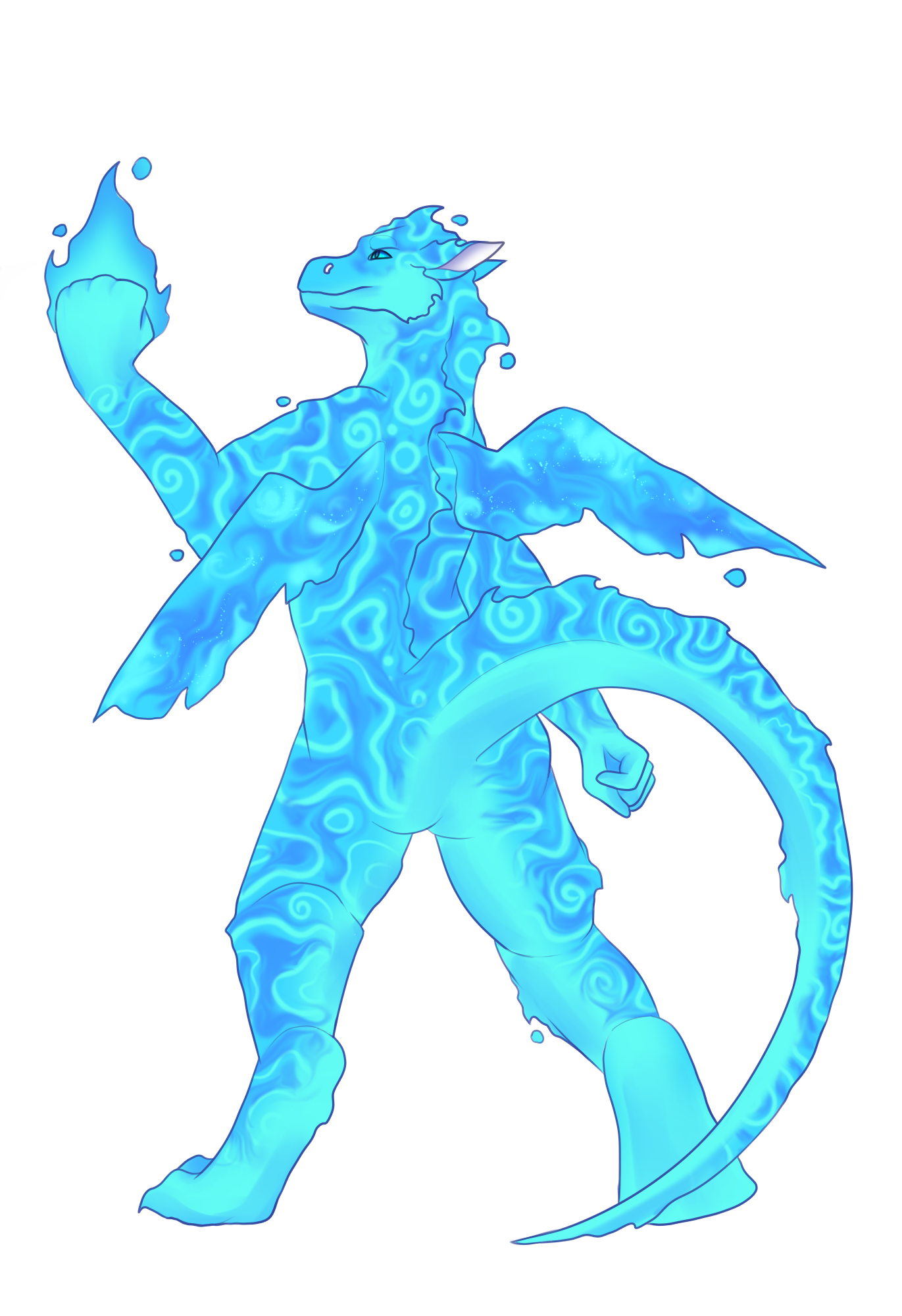 Dragon powers which he can teleport with and sort of turn into a glowing ball. None Gods can´t touch him and can just walk through him. His whole body is blue cold fire but not dangerous. Has the ability to breath white-blue fire pretty fast. He got this dragon chi later then, when he got closer and closer to Becky (his wife now). Because of her, and her love to him, his powers evolved. Which is very impressive. To become an inferno is very special. 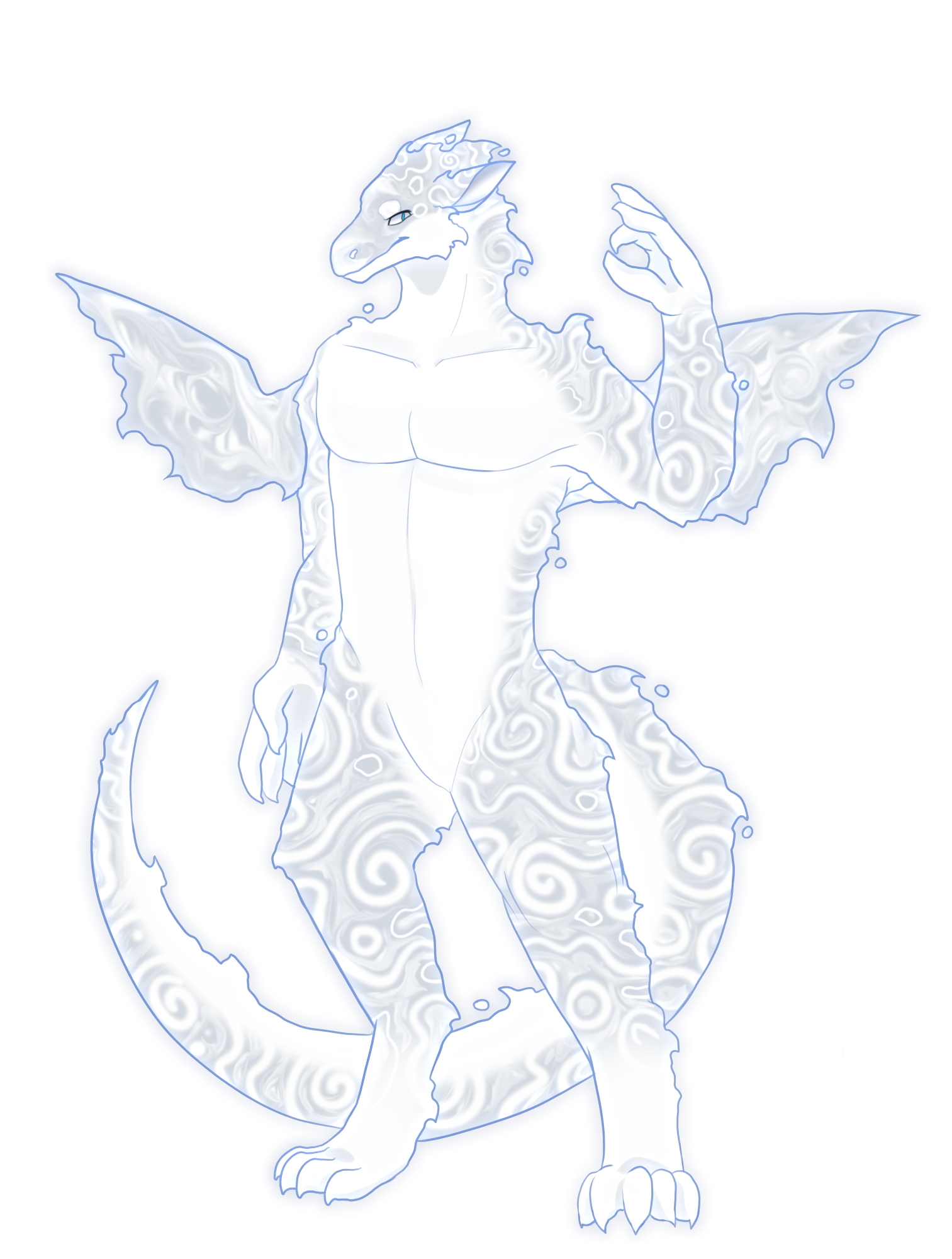 Very similar to the blue inferno powers but its meaning is way different. The white Inferno will become a "wise white dragon" one day! A big white dragon, living in a crystal castle high in the sky, protected with a magical barrier. Right now a bone turtle called Fred owns them! Many individuals fear them but also have high respect! A huge white, scally dragon! He doesn´t turn into this form alone. He and his doppelganger friend Lucius can merge together into this big, 300 meters long, gigantic noodle! They can fly very fast, breathe a white cold beam of fire and ice, and can also shoot fireballs at maximum speed. Very destructive. They probably have a bit too much fun with it ☠ Only one of the two has control over the body! "Green Inferno" , also known as "green flame" is a combination of the pink and blue inferno. If both merge, they became one and turn into a green firey dragon! One soul has control over the body. Mainly the stronger one of the two. Stronger mentally, not physical. 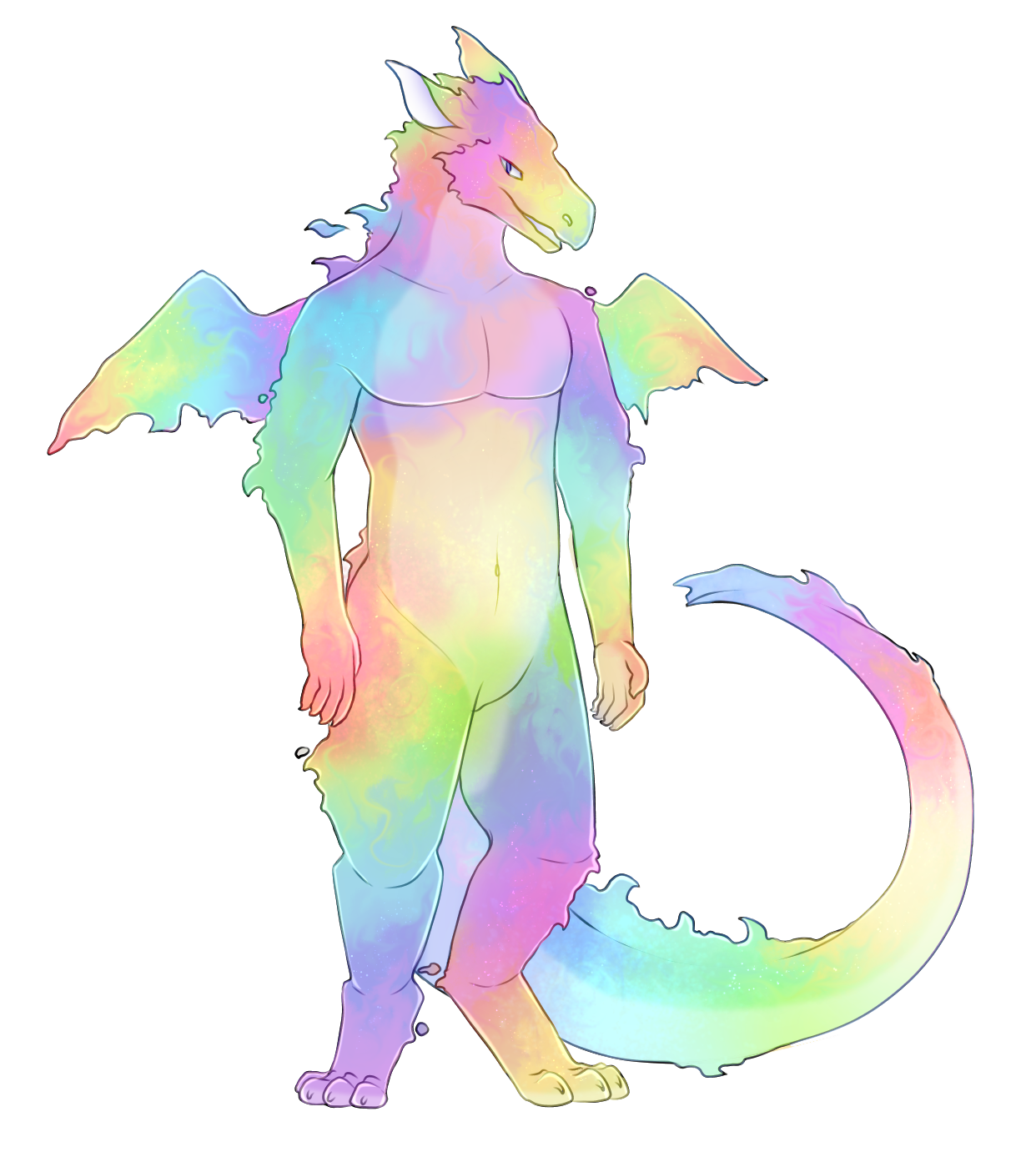 Rainbow Beam or "Rainbow Inferno" is a special form which he developed just recently in his life due to having too much power. How exactly it developed is still is a pretty big mystery. This form is quite different compared to the other ones. He can turn into a long, rainbow colored fire dragon but can also create this exact form next to him which he can controll with his mind. Which is not an easy task. He still needs to learn a lot about this form and how to controll it´s power fully. "Rainbow Beam" is not a Chi you can obtain like the other ones. It´s a mysterious mutation which only Lui has access to.